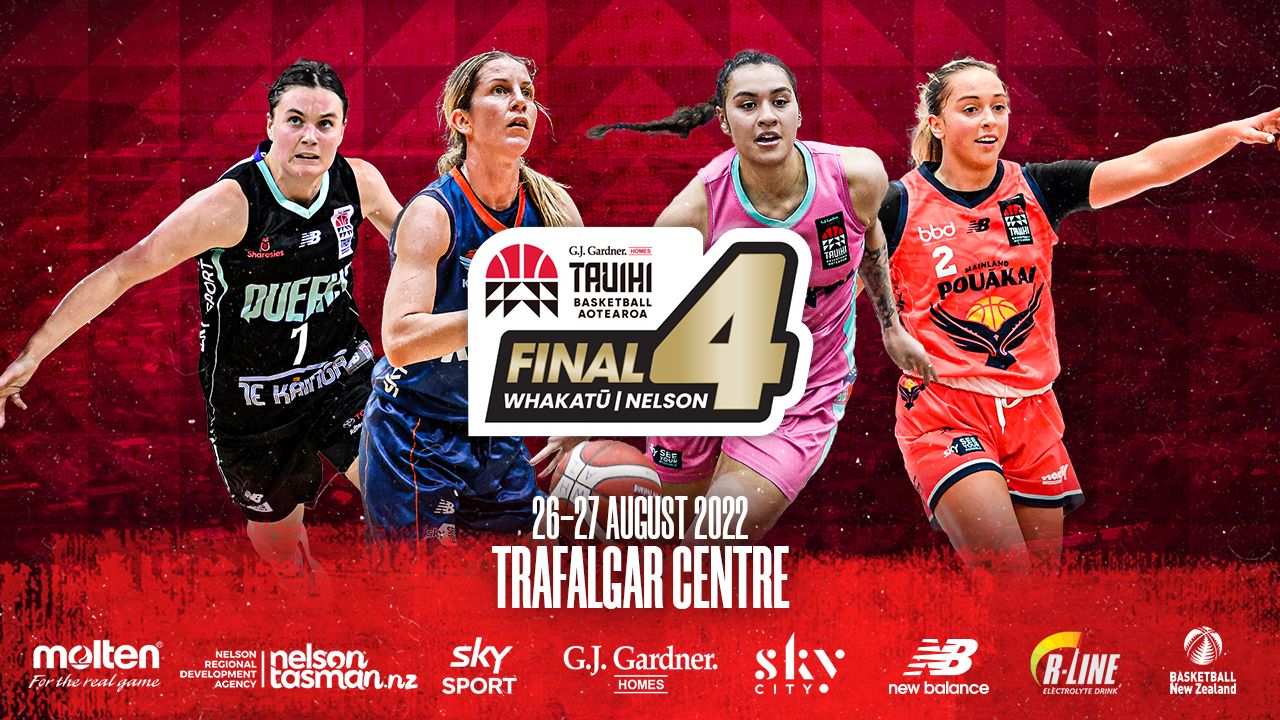 The stage is set for GJ Gardner Homes Tauihi Basketball Aotearoa to play their first-ever Final 4 event at Nelson’s Trafalgar Centre later this month, with tickets now available for purchase.

On Friday 26 and Saturday 27 August, the Final 4 sees the top four teams from GJ Gardner Homes Tauihi heading to Nelson to battle it out for the national women’s title. The games will also be tied into other community events in the region, including school visits by the players and other opportunities for fans to meet their sporting heroes in person.

GM Leagues Huw Beynon, currently in Auckland for the Sal’s NBL Final 6, says that the Final 4 will be a fitting finale for what’s been an epic first season for Tauihi.

“We’re extremely pleased with the inaugural season of GJ Gardner Homes Tauihi, both from the standpoint of it delivering a high quality of women’s basketball for Aotearoa – and also how well the competition has been embraced by basketball fans,” says Beynon.

“The players and teams have all been outstanding this season and we’ve already seen some incredible performances and battles between these five teams. So for Tauihi to come to its conclusion in Nelson later this month is exciting for everyone involved, it’ll be a treat for Nelsonians and anyone who travels to the event.”

Beynon says that another benefit of Tauihi has been the elevation of women’s basketball as a viable sport in New Zealand.

“It’s been noticeable for us, in that we’re seeing more interest in women and girls wanting to either take up basketball or get back into it again. And that’s always been a goal for us; we want women’s basketball to be on an equal footing with the men’s competition, and we want this league to help build new pathways for Kiwi girls to be the best they can be within the sport.”

Managing Director of GJ Gardner Homes, Ellie Porteous is excited for the Final 4 to showcase some of the best and brightest female athletes in the country.

“It has been a pleasure for myself and GJ Gardner Homes to be part of this inaugural season, and to have helped play a part in women’s basketball getting the recognition that it deserves,” says Porteous.

“GJ Gardner Homes has always had a passion for women in sport and for giving back to the community, so this partnership with Tauihi has been fantastic for us. As a product, the league has delivered huge excitement for fans this season, as well as giving opportunities for young kiwi athletes to showcase their ability on a massive stage.”

Rebecca Leach, Events Lead for Nelson Regional Development Agency (NRDA) who is a major partner of the Final 4 event, says that Nelson is the perfect place to host the Final 4.

“NRDA is delighted to working with Tauihi to make this event happen; beyond the fact that Nelson and the Tasman region is a fantastic place to either live in or visit, we believe we have one of the nation’s top basketball venues in the Trafalgar Centre - as well as a fanbase who are basketball-mad,” says Leach.

“We’re counting on Nelsonians to support this important event by turning up on the Friday and Saturday night, and in return they’ll be treated to some amazing women’s basketball action.”

Tickets start from only $13 for 1 Adult + 1 child; available now at: https://tauihi.flicket.co.nz