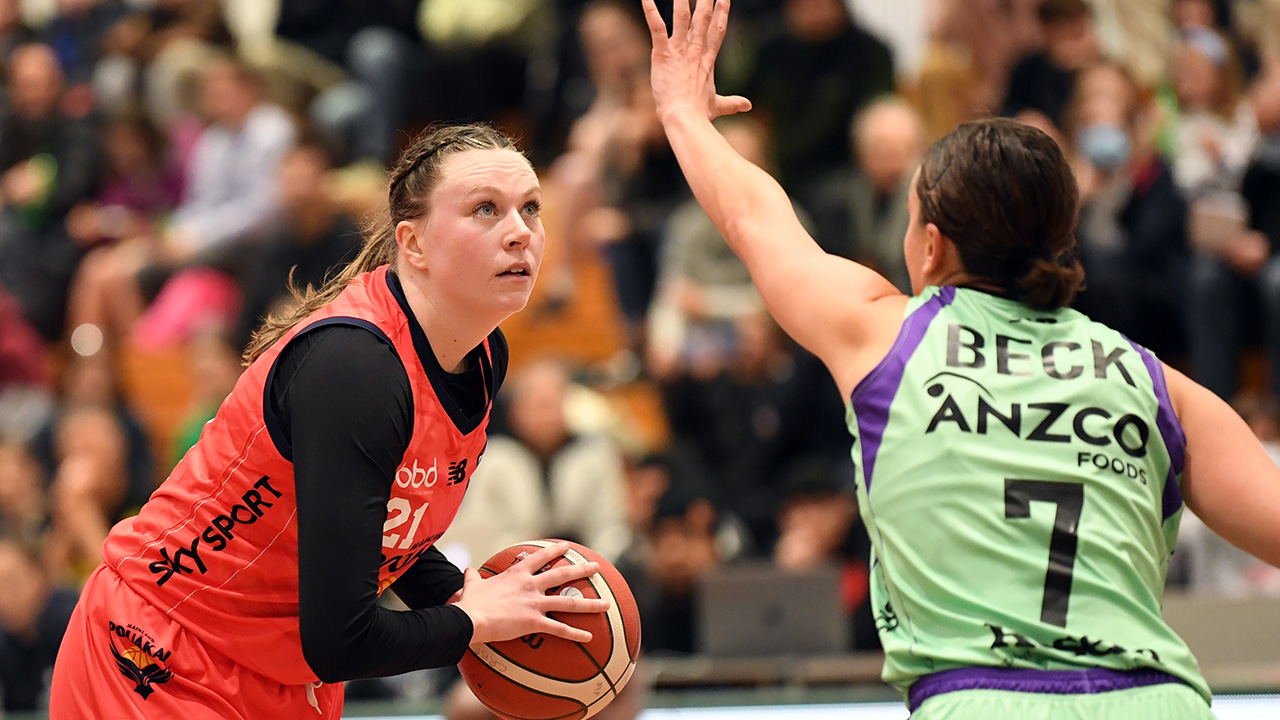 We have made it to the Final 4 of GJ Gardner Homes Tauihi 2022. The culmination of a historic, entertaining and inspiring season that we’ll never forget.

From Tiarna Clarke shooting the lights out for 11 three-pointers in Round 3, to Baptiste ankle-breakers, Snyder erupting for 32 on opening night, and Tahlia Tupaea’s ability to eliminate anyone in her way on any given night - Tauihi lived up to expectations, and more.

To begin the last round of the regular season, the Tokomanawa Queens continued their command over the Northern Kāhu. They won a nail-biter that saw Jaime Nared have a titanic performance with 29 points, 7 rebounds, 4 assists and 3 steals. The Kāhu’s Tupaea and Micaela Cocks responded with a combined 45 points but the homeside never let up, managing to maintain their composure until the end.

Josie Trousdell bought finesse and energy for the Queens, blocking shots and making sure she let her opponent know about it. With both sides struggling to fire from downtown, the contest came down to grit and a battle in the key with the Kāhu recording 50 of their 79 points in the paint.

Following their defeat to Mainland, the Whai bounced back to beat the Southern Hoiho led by the young Kiwi duo of Esra McGoldrick (13 points, 10 rebounds, 3 blocks) and Sharne Robati (14 points, 6 rebounds, 2 assists). McGoldrick’s clutch play propelled the Whai past the Hoiho which will bode well when her team plays the Kāhu in their semi-final. Despite the loss, you couldn’t fault the incredible efforts of Laina Snyder who carried the Hoiho with 21 points and 15 rebounds.

The Kāhu ended their regular season much like how they had played throughout - assertive and physical. The Pouākai challenged the minor premiers keeping the game close in the first half led by Americans Erin Whalen and Baptiste. But the Kāhu surged in the second period with Marte Grays willing herself to score under the basket and putting her body on the line. 65 of the Kāhu’s points came from Tupaea, Cocks and Grays.

The Whai have shown their fight throughout the season, but the top-seeded Kāhu will be favourites to win the first ever semi-final of Tauihi, after a 10-2 season.

Their one two-punch of All Stars Tupaea and Cocks cannot be ignored. The Kāhu usually get off to a slow start but they’ll want to come out firing in this win or bust encounter.

Keys to winning for the Kāhu will be shooting better from the three-point line as they could be pushed out with Defensive Player of the year, Nikki Greene guarding the paint. The Northerners also shot 35% from the perimeter in their victory over the Pouākai, and made 3 of 20 in their defeat to the Queens, so will be looking to improve on that.

If their perimeter shots aren’t falling, their willingness to drive to the glass and draw contact is key and has worked in their favour in round 7.

Keys to winning for the Whai will be dominating through their downtown scoring prowess and creating space for their All Star guard Lambert to make plays in the lane. She’s unstoppable when she’s free to generate opportunities for her teammates. Playing a more physical match will also help the Whai against the Kāhu who aren’t afraid to take the contact.

Look out for the matchup between Micaela Cocks and Kyra Lambert as the two dynamic guards go at it.

Having beaten them twice this season, the Pouākai have the upper hand over the Queens but the Wellington side’s recent form, being on a five-game win streak suggests they are the favourites to win.

Keys to winning for the Pouākai will be coming out with the same intensity they did against the Kāhu this round and making adjustments based on how the Queens respond.

Improving on their accuracy from the resene will also be important as they made only 56% of their free throws in their loss to the Kāhu. In finals basketball where anything can happen, it’s crucial they make these shots.

The same will apply for the Queens who were 18 of 30 from the free-throw line in their one point win over the Northerners. Staying composed and taking care of the ball will be key for the Queens as the Pouākai showed against the Kāhu, that they can easily go from being down by double-digits to being within a few possessions.

Look out for the matchup between Jaime Nared and Trinity Baptiste who will be wanting to put on a show.

It will all be on the line in Nelson, as the first ever champions of Tauihi Basketball Aotearoa are crowned.