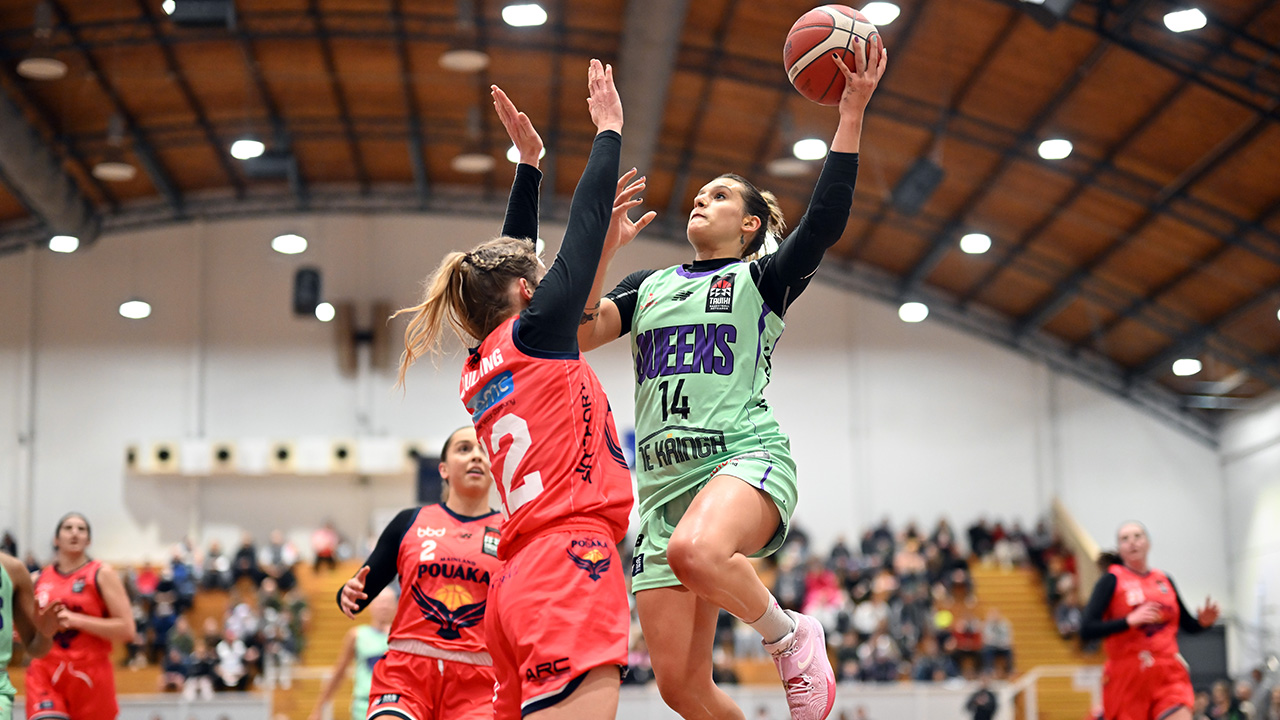 At the half-way mark of the inaugural GJ Gardner Homes Tauihi Basketball Aotearoa it is perhaps time to reflect on what have been the endearing features in the opening weeks.

In what is believed to be an all-time record for most 3-pointers made by a woman in a New Zealand professional basketball game, Clarke scored 34 points, shooting 11-of-20 overall on her 3-point attempts. She hit nine shots from beyond the arc in the second half, including six triples in the third quarter when her team erupted for a season-high 41 points in the period.

Look for Clarke to do more of the same in the black singlet at the Commonwealth Games in Birmingham later this month.

Age is only a number

Micaela Cocks hasn’t been sighted in the New Zealand domestic competition for over a decade but you can see why Northern Kāhu were desperate to bring the Tall Ferns most capped player back to her home region.

The 36 year-old is the leading New Zealand scorer in Tauihi 2022 averaging 17.7 points per game. Her early season form has been a big factor in the Kāhu making such a strong start to the season.

The welcome home placards have been on display at every franchise.

In addition to the return of Micaela Cocks Northern Kāhu greeted a couple of players at the opposite end of their professional careers from the Tall Ferns most capped player.

Whilst Cocks is a 13 season veteran, Tera Reed and Krystal-Leger-Walker are debuting in the pro ranks following standout NCAA Division I collegiate careers.

Kendell Heremaia is another player dipping her toes in the professional environment for the first time. After a 5-year stint at Fordham University, the 23 year-old had to sit out the first four Whai games after picking up an injury in a pre-season fixture.

Heremaia showed a glimpse of what is to come in Whai’s most recent match – 9 points, 3 rebounds, 2 steals and 2 blocks in just 19 minutes against Kāhu.

Parris Mason has largely focused on netball since playing for the Junior Tall Ferns back in 2019 but it hasn’t taken the 19 year-old long to make an impression with the Tokomanawa Queens.

The rangy forward has gone from playing 90 seconds in the opening game of the season to an average 19 minutes in her four most recent runouts.

Pouākai laid out the welcome mat for a trio of Mainlanders - Mary Goulding, Tsubasa Nisbet and Tessa Morrison.

Goulding is back after a couple of successful season in the Australian WNBL with Bendigo Spirit while Nisbet returns from the States after a four year career at Georgia Southern University.

Morrison, the former Canterbury Wildcats skipper, has laced up the boots in impressive fashion having played little basketball since suffering an ACL injury in 2020. Eight points in the recent encounter with Whai perhaps a sign of a productive second half of the season for the Cantabrian stalwart.

In Dunedin, Janet Maoate-Breen’s surprise return from Australia received some approving nods and the appearance of Nicole Ruske, after a long injury lay-off, was a timely boost.

However, the biggest welcome, not only in Hoiho territory but around the country, has been for Samara Gallaher. Five years after retiring from the game due to concussion issues the former Tall Fern has made an impressive return to top flight basketball.

Gallaher announced her return to the professional arena with a double-double of 19 points and 10 rebounds in Hoiho’s second game of the season against Kāhu.

In addition to her charismatic leadership qualities the 29 year-old is averaging 7.7 points and 4.2 rebounds per game - expect more outstanding performances in the coming weeks.

With three overseas players permitted to play on each team the influx of foreign talent has, as anticipated, raised the standard of play enormously in GJ Gardner Tauihi. With apologies to the other ten players here are five to have caught the eye.

Laina Snyder was massive for Hoiho last weekend. Her 32 points, along with 8 assists and 6 rebounds, carrying the Southerners to within a whisker of claiming their first win of the season at Eventfinda Stadium. The Ohio native is second in the league in scoring averaging 19.8 points per game.

Mainland Pouākai have unearthed a gem in Trinity Baptiste. A seemingly automatic mid-range jump shot has enabled the Indiana Fever WNBA draft pick to average a league-high 21.3 points per game – making a heady 68.7% from the field and 94% from the free-throw line.

Tokomanawa Queens former WNBA player Jaime Nared missed the opening game of the season, found her game legs in the second, and has been all class since. The former Las Vegas Aces wing has averaged 20.5 points, 7.5 rebounds and 3.3 assists in her last four appearances.

The dynamic Kyra Lambert has had Whai fans on triple-double watch on more than one occasion. Leading Tauihi in assists, with 6.2 per game, the former Duke University star also averages 16.2 points and 8 rebounds each outing.

Best laid plans and all that

Covid absences have become a way of life and teams and individual players have learnt to ride out that scenario.  However, when major injuries occur club officials have to make quick decisions.

Unfortunately for Whai, import Dominique McBryde went down with a serious ankle injury in the away defeat at Kāhu.

A phone call to Matangiroa Flavell did the trick – the former Tall Fern not only joined the team at short notice for their trip to Christchurch but nailed threes with her first three shots after coming off the bench!

Good planning or good luck? Every team will need a bit of both as we head towards the business end of the season.