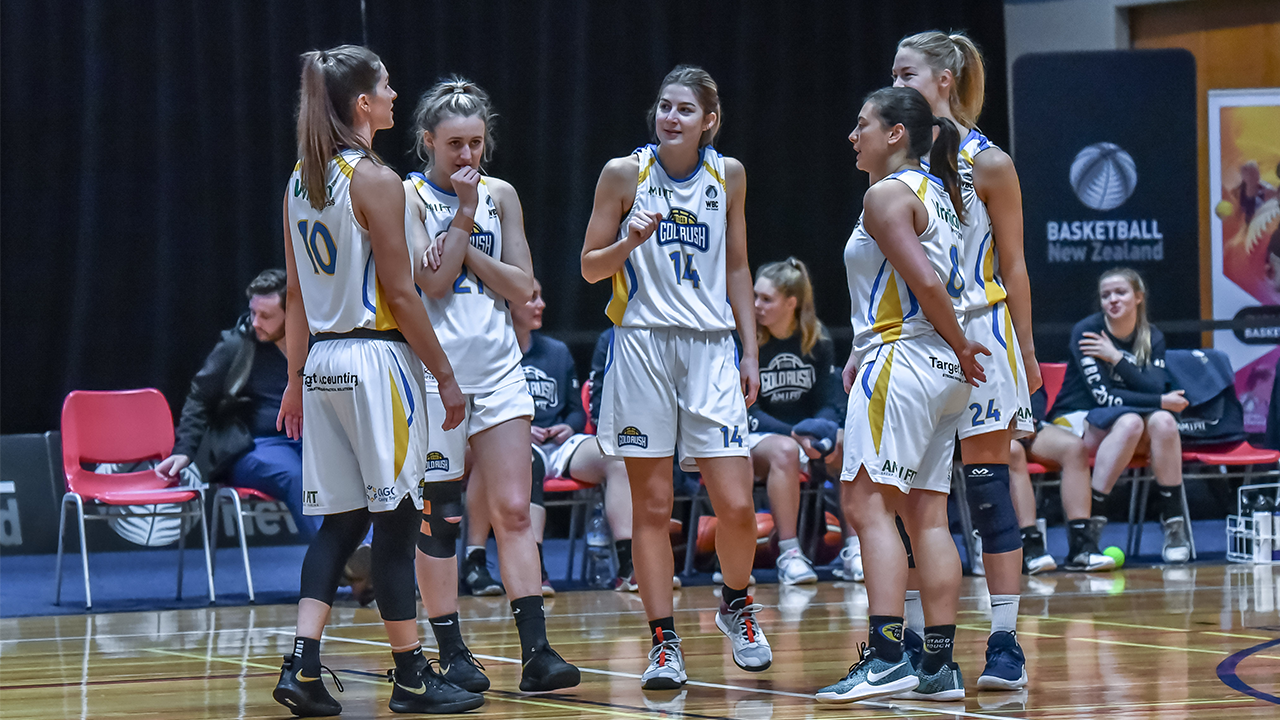 Gold Rush out to build on city’s success

“The Gold Rush players are absolutely pumped for the 18in18. They’ve been training virtually every week since February, and for much of the year, they weren’t sure if they would even get to play in 2020.

“Then they watched their male counterparts, the Nuggets, go on their incredible championship-winning comeback to the Sal’s NBL which inspired basketballers right across Otago, and inspired the Gold Rush players to want to have their opportunity of trying to do similar."

“The Gold Rush are not really a team of superstars, but we do have some very good players, we’re fast, and we’ll defend strongly.

“Gavin has the team very well-coached and well organised, and we have an excellent balance of youth and experience. If a team is going to beat the Gold Rush they’ll be made to earn their win.”

Richards, a Tall Ferns debutant in 2019, was a key player for the Gold Rush last season, averaging 16.4 points and 6.8 rebounds per game. A similar output will be required from the power forward this season if the southerners are to claim gold.

In addition, the Gold Rush have added seasoned campaigners Hayley Gray and Lisa Wallbutton plus American forward Savanna Handevidt. Handevidt was a standout forward at Minnesota State University from where she graduated in 2016.

Gray enjoyed plenty of success with the Canterbury Wildcats, captaining the team to WBC rings in 2016 and 2017.

Wallbutton had an illustrious Tall Ferns career and is one of just a handful of players to have played over 100 games for the senior national team. She was a key player at the 2008 Olympics, averaging 10 points and 5 rebounds per game.

Wallbutton says she is looking forward to the upcoming 18IN18 and playing her part in the growth of the team.

“We are building a great programme down here in Dunedin, so I’m excited to see how we stack up against other teams,” she said.

Preparing the team for 18IN18 is not without its challenges for Nuggets management.

“We’ve been training all year, however, 70% of our team are university students and therefore many in the team are juggling NBL training with exams at the moment. It’s made things a little tricky but we’re making the best of it.

“The group has come together really well and we’ll be ready to go full throttle in Auckland. We’ve stayed fit through the year and have had the longest ‘pre-season’ in history due to COVID. So we’re good to go,” says Drew.

The Gold Rush will be the last of the six participating teams to open their 18IN18 campaign when they lineup against Harbour Breeze on Monday 23 November. They will face the Waikato Wizards the next night then return to Dunedin before facing the Capital Swish on 28 November.

“This is a unique playing experience for the team, and we’ve embraced the challenges that come with something different and challenging.

“We have three separate trips from the south up to Auckland with Gold Rush players having to fly in from Dunedin, Invercargill and Queenstown.

“Each time we fly in, our first game is on the same day we fly, so we need to be ready to adapt immediately to a new playing environment.

"We need to get our eating plans carefully planned out in advance, get our travel timings planned between the hotel and stadium, and make sure we recover well after the game so that we can back up and play hard again the next day. It's challenging, but we embrace that and are planning well for it,” added Drew.

The playing and travel demands of 18IN18, with all games being played in Auckland, will certainly test the players and coaching staff.

“Some of our students have also decided to put their summer jobs on hold for a couple of weeks after exams finish so that they can take part in this unique opportunity. That is a significant financial sacrifice for them.

“So you can see how much it means to these players. They really want to be a part of this as it’s something that is special, unique, and groundbreaking for women’s basketball in New Zealand.”

Gold Rush Coach Gavin Briggs is focused on having his team ready to perform come 23 November.

“Each team only has 5 games before the playoff teams are determined, so there is no time to find your feet and work your way into the tournament. Good planning and preparation are important for that. On the court, defence will always be crucial, especially for us.”

Briggs is also looking at the bigger picture for the Gold Rush and women’s basketball in New Zealand.

“18IN18 is a big learning opportunity for our team. For many of the squad it will be their first time playing at this level, so just learning how to train hard, how to prepare well, being able to perform under pressure, and generally learning how to operate in the best way as a semi-professional athlete.

“Overall, 18IN18 Sal’s NBL is a fantastic opportunity for women’s basketball in New Zealand to showcase itself to the public, the media, and potential partners. This can set a great platform to build and transform women’s basketball for the future.

“Of course winning games is important to us up in Auckland, but really we just want to build this team and make them better, with an eye towards 2021 and 2022 for this team to hopefully really develop and reach its potential.

“We also want to set standards back in Otago for how we train and play so that young girls coming through can see that and become a part of really positive and professional basketball culture.

“Our Under 15 and Under 17 girls teams just did really well at Nationals (3rd at U15s and 4th at U17s), so we want this Gold Rush team to inspire that group of talented youngsters, and we want those girls seeing and becoming a part of a great training and development culture in Otago so that they can become future champions.

“So that’s our main goal for the 18in18. Put on a good show for those watching, but also really help build things for a strong future of women’s basketball in Otago."

All 18 games of the Sal’s NBL are being broadcast live on SkySport and Briggs believes this is a huge boost for women’s basketball.

“It’s an incredible opportunity. Basketball is the fastest growing sport in New Zealand and is very close to being the number one participation sport. For the women’s game to now be able to showcase the sport on prime-time television to youngsters all over the country is massive for women and girls basketball.

“Not only will it help entice young girls to play basketball, but it will also help to develop commercial partnerships which will be crucial to further develop the Sal’s NBL Women.

Can the Gold Rush emulate the success of the Nuggets and win the Sal’s NBL 18IN18?

We don’t have long to wait before we find out. 18IN18 tips-off this Thursday (19 November) when the defending champion Auckland Dream take on the Waikato Wizards at Pulman Arena.

Check out the Gold Rush’s full roster along with all five other 18IN18 teams here.