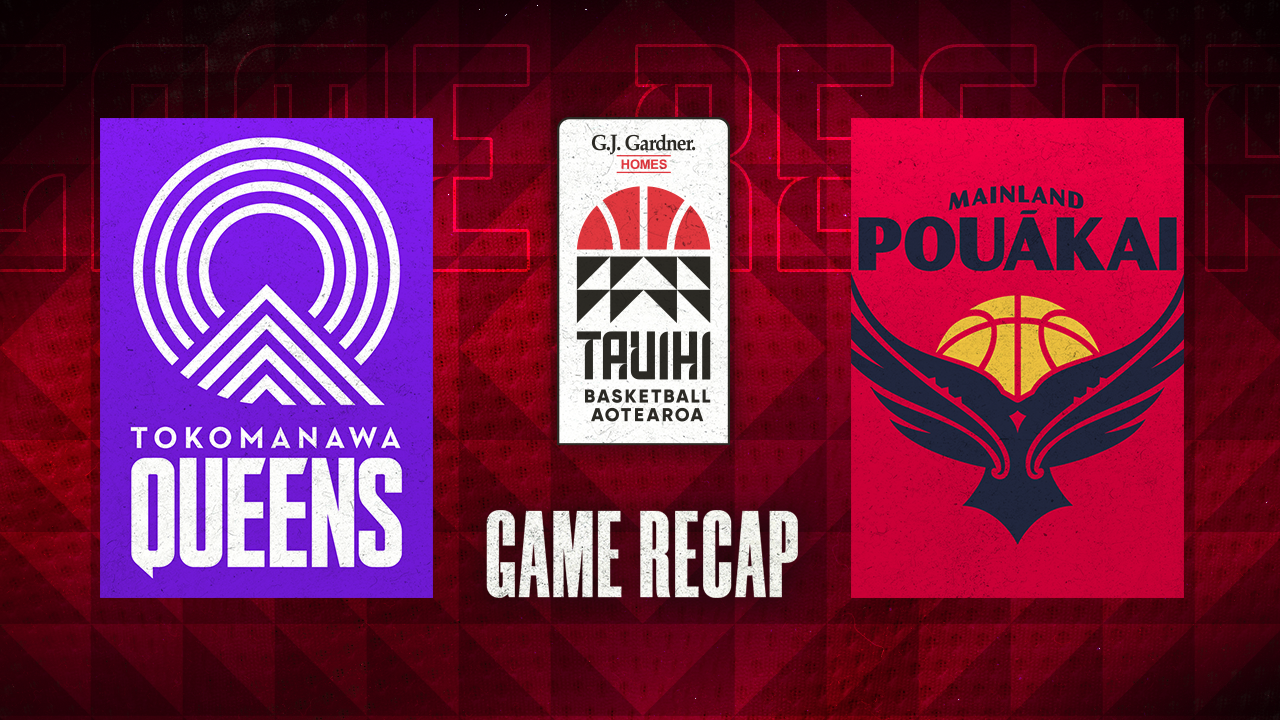 GAME RECAP: Pouākai move to 3-2 with close win over Queens

The Mainland Pouākai have defeated the Tokomanawa Queens for the second time in just over 48 hours with a tight 69-66 victory in the capital.

It was a closely contested first quarter with just two points separating the teams after 10 minutes of action. All five starters scored at least two points in the quarter, but it was the boost provided by Grace Hunter off the bench that had a noticeable impact. She had started the previous three games for the Queens but was moved to the bench in favour of defensive specialist Parris Mason. Hunter had four points in the first quarter and one big block on a Cierra Walker 3-point attempt.

The second leading scorer in Tauihi this season Trinity Baptiste (20.3 PPG) had seven points to pace the Pouākai  in the first, but it was the six turnovers that put them behind early. Turnovers have crept into Mainland's games from time-to-time and it seems to be one of their only major blemishes to date. The Pouākai perhaps avoided further damage, with the Queens shooting 0-of-9 from deep in the first quarter.

Those Mainland turnovers essentially disappeared in the second quarter and it enabled them to open up a lead on the Queens, outscoring them 18-10 to give them a 35-29 lead at halftime. With just two turnovers and some sound defence on the other end, the Pouākai were able to create some separation in a similar way to what they did to the Queens in Christchurch on Tuesday.

The Queens had seven points from import Jaime Nared but she shot just 2-of-7 through the first 20 minutes. She has been dealing with a back issue since the first game of the season and it appears to still be lingering, as she received treatment on her back when on the bench. Jacinta Beckley offered a solid punch off the bench with six first half points for Tokomanawa.

The Pouākai committed five turnovers in the first three minutes of the second half and it led to an early timeout from a frustrated Tully Bevilaqua. They would turn the ball over again a matter of seconds later, throwing their sixth turnover directly to their head coach on the sideline. Despite failing to look after the ball to start the third quarter, they Queens had only scored two points during that span and they still trailed Mainland by six.

The Queens finally hit their first 3-pointer of the contest with 20 seconds to play in the third quarter, and it came via Jaime Nared who was fouled on the make as well. Tokomanawa would outscore Mainland 15-14 in the quarter but still trailed 44-49 heading to the fourth.

It was 14-7 on the offensive glass and 38-27 in total rebounding through three quarters, and that big edge was likely the biggest reason the Pouākai had kept themselves in front. They would turn the ball over eight times in the quarter, so only being outscored by one is quite the escape for Mainland.

The fourth quarter was physical and both teams were trading buckets throughout the duration. It was tied at 64 with just over a minute to play after a Florencia Chagas bucket, but Pouākai import Trinity Baptiste nailed four straight free throws to seal the deal and give them their second win over the Queens within 48 hours.

One of the biggest reasons the Pouākai were able to close it out in the fourth? They turned the ball over just once over the final 10 minutes; anymore and they could have certainly ended up on the otherside of the result. Mainland got the job done when they needed to, but coach Bevilaqua will have a lot to say to her team after the victory about tidying up those turnovers moving forward.

Baptiste turned in another monster effort for the victors, posting 27 points on 10-of-14 shooting from the floor. She's been incredibly impressive during her short time in New Zealand, with her ability to make contested jumpers in the midrange incomparable to anyone else in the league. Tessa Boagni chipped in 13 points and seven boards on 4-of-8 shooting and Ella Fotu had 10 points off the bench.

Jaime Nared was productive for the Queens in the loss, compiling 24 points and 10 rebounds. Elin Gustavsson managed 12 & 9, while Florencia Chagas and Jacinte Beckley each finished with 10 points a piece.