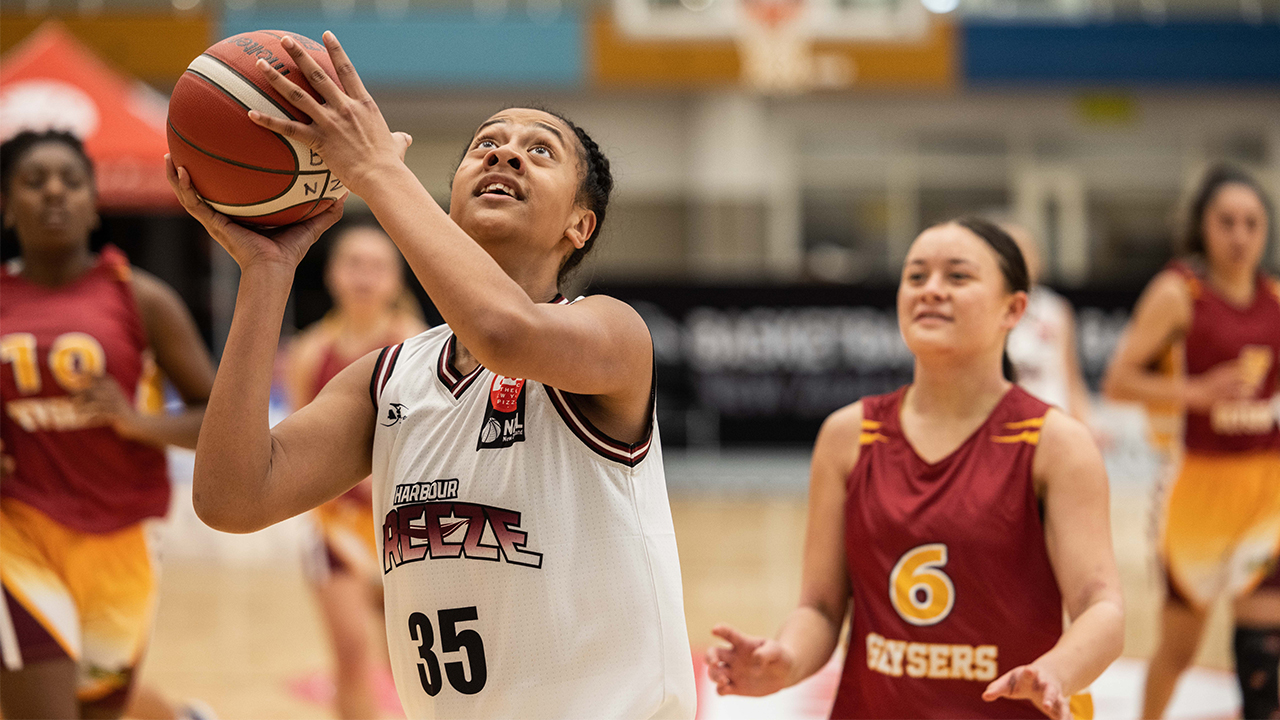 CLOSE ENCOUNTERS THE THEME ON DAY ONE OF D-LEAGUE

Day one of the Sal’s NBL D-League came to an end this evening after four games were played across the day at Pulman Arena.

Teams travelled from as far as Taranaki and as close as Auckland’s CBD to make up the eight-team competition, which will see a winner crowned following the grand final on Sunday at 3PM.

The opener for the four-day tournament was a matchup between cross-town rivals, Auckland and Harbour (Cyclones), where the latter prevailed 76-74 after the lead changed hands three times in the final 10 seconds.

Cyclone Rikki Burgess-Fiatau knocked down the eventual game-winner, but not before Auckland standout, Mele Latu, scored the last of her 22 points from an inbounds play.

Forward Izzy Pugh was another notable contributor for the eventual winners. The Westlake Girls’ High School student’s 10-point first half propelled her side to a seven-point lead at break and added another 15 after it to help withstand their opponent’s second-half surge.

The battle between the Rotorua Geysers and Harbour Zephyr was a low-scoring affair which the Bay of Plenty locals ground out a 62-47 win.

The Geysers shot out to a 22-11 lead midway through the second after a neck-and-neck opening period. Guard Waiata Jennings was the focal point of the offence for much of the game (22pts & 4rbs) and was ably assisted by skipper Awatea Leach (12pts & 6rbs).

Harbour got to within seven late in the third quarter thanks to some nice passages from Vitolia Tuilave (18pts & 14rbs), but that was as close as they’d get as the out of towners kicked on and away.

The Platinum Homes Taranaki Thunder made the Northland Phoenix work for their 68-64 victory after leading by just under double digits at the start of the final spell.

Triples on back-to-back possessions by Thunder players Teghan Omelvana-Ngatai (17pts) and Olivia Bright (5pts & 7rbs) pulled them to within five with as many minutes remianing, only Mahina-AKukutai-Wairau (16pts & 10rbs) came to the rescue with points of her own.

Omelvana-Ngatai popped up further down the track with another flurry of baskets, this time making it a one-score game with less than 60 on the clock. However, today wasn’t the Thunders’ day as the Phoenix held on with makes from Te Rina Cameron-Tana (10pts & 8rbs).

Round out the day’s play was a back-and-forth thriller between Capital and the Tauranga Coasters. The points dried up as the curtains came to a close with the Coasters 95-87 to the good on the scoreboard.

The Wellingtonians were down by 10 at one stage during the fourth and had a number of big baskets cancelled out with instant replies. The effort never dwindled though, and they were duly rewarded for their persistence as the tallies drew level.

Things went undone after the game-tying make with the audacious passes finding the opposition rather than its intended target.

Meanwhile, Kaatia Watene (19pts & 9rbs) and Sophie Rogers (12pts & 5rbs) made the most of their open looks and restored their advantage.

Day two will follow the same suit as today’s action, the only difference being tip-off times will run one hour earlier. The Harbour Cyclones and Northland Phoenix kick things off tomorrow morning (9am).